Powhatan School is pleased to announce the generous donation by Agnes Crocker Brengle, Constance B. Crocker, and Isabelle Crocker Osborne of 46.8 acres. The land, which will be held in perpetual easement for educational and recreational uses, more than triples the current acreage of the campus and will allow Powhatan to expand its commitments to environmental science, outdoor recreation, and the study of nature.

This gift solidifies a long-term educational relationship between Powhatan and the Crocker/Carter family.  For many years the family has graciously allowed Powhatan to use the land to incorporate environmental study into the curriculum. Generations of Powhatan students have benefited greatly from the existing nature trail and the associated environmental activities held on the property. 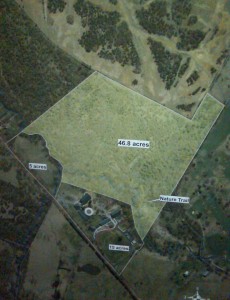 “The opportunity for our faculty to elevate experiential learning is exciting,” says Head of School Ms. Susan Scarborough. “This gift allows us to continue to broaden the Nature Enhanced Approach to Learning (NEAL) program and reinforces Powhatan’s commitment to environmental education. We plan to look for ways our students can be not only beneficiaries of this wonderful gift but also act as environmentalists, entrusted with using the land appropriately and maintaining its natural habitats, trees and plants.”

In a formal resolution to thank and honor the family for their generosity, the Board of Trustees of Powhatan School announced that the additional property will bear the title The Crocker Conservancy.

The Carter/Crocker family and the property have played an important role for many years in the history of the school. The name Powhatan derives from the relationship between the school and the family. The school was originally incorporated in 1948 by a dedicated group of parents with elementary aged children who were committed to providing an enriching and rigorous atmosphere for learning. At that time, the school was known as the Blue Ridge Country Day School and was located in a small red schoolhouse in Millwood, Virginia.

In 1957, Isabelle Carter Crocker donated the original 14.9 acres to Blue Ridge Country Day School. One of the few stipulations of this generous gift was that the name Powhatan remain with the property. The school was then renamed Powhatan School.

An additional 5.2 acres was conveyed to Powhatan School by the family for athletic fields in 1992. The entire property, donated over time, encompasses a stunning 67 acres.

The announcement of the donation culminates former Powhatan School Headmaster John Lathrop’s ongoing relationship between Powhatan and the Carter/Crocker family.  “It was one of the last things he did before retiring,” said Scarborough. “John was always thinking of ways to expand opportunities for our children. He knew this gift would benefit generations of future Powhatan students and we truly thank John for his efforts in this regard.”