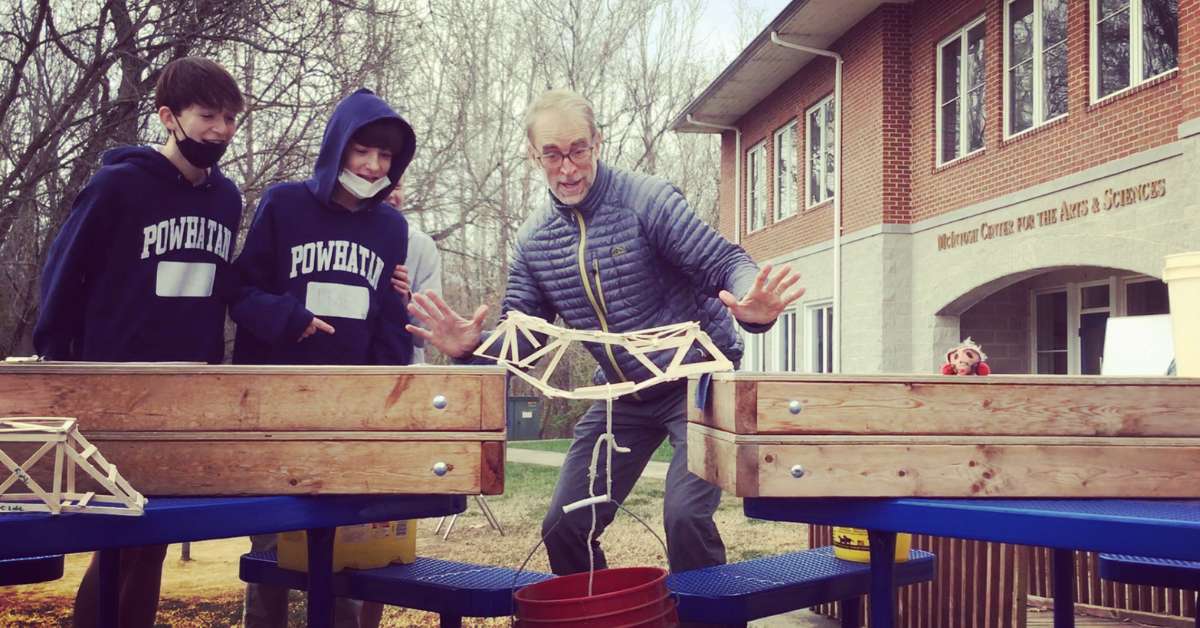 In this particular Design Challenge, students in Mr. Funk’s geometry class were tasked with designing and constructing bridges made out of only popsicle sticks and glue. They started out in the Makerspace with Mrs. Miller, the innovation and technology teacher, with a short problem-solving activity to get their designs started during Maker Week. Each team had to incorporate different geometric shapes within their structure, including three other triangles and three different quadrilaterals. The objective was to build the lightest bridge that could hold the most weight. A ratio of weight to strength would establish the winner.

Students spent a few mornings in the makerspace constructing bridges during math class. It was the perfect setting for them to collaborate and create, often exploring multiple designs only to tear them down and start over. For example, some of the teams entered two bridges with different designs to see if there was a difference.

They came up with some creative models using engineering elements of real-world bridges, including Truss, Beam, and Cantilever bridges. Each bridge was weighed before the STEM activity.

They evaluated their bridges by testing how much weight each bridge could support. Then, Mr. Funk would slowly pour water into the bucket to determine the strength. After each bridge collapsed, the bucket of water was weighed and the data was recorded.

After all of the excitement, students headed back to the classroom where Mr. Funk tied together the activity with a real-world example of a passion of his – bicycles – and explained how the strength in frames is expressed in ratios. “In designing bicycles, you can use many different materials including steel, carbon, titanium, and so on,” explains Mr. Funk, the Upper School geometry teacher. “When carbon bikes were gaining popularity, I got to work with a bike company to see how light the can made a bike without losing strength. It came down the the number of layers of carbon on certain parts of the bike.”

After the mini-lesson, students got to work on the formula to determine the winner and reflected on what they had learned. Interestingly, the strongest bridge that held the most water was not the winner. Watch the video above to see the winning design.