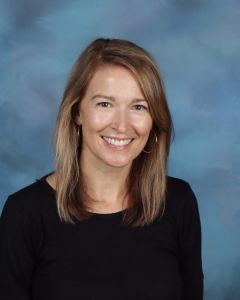 Bio: Louise was born in Emporia, VA but moved to Clarke County as a baby. Her father served as school superintendent in Clarke County and she was educated in the public schools here. Louise learned to play tennis at the nearby Millwood Country Club courts and spent her high school years playing tennis and summers traveling to many tennis tournaments.

At UVA, Jaffe was a history major with a minor in Religious Studies, taking many English classes and lived in the Italian House during summer school while an undergraduate.

Jaffe began her teaching career by teaching Kindergarten at Virginia Avenue Charlotte DeHart Elementary School. She went on to later teach second through fifth grades there, before moving to Powhatan. A highlight of teaching at Powhatan was teaching one particular class in the fourth grade, sixth grade and seventh grade. Jaffe wrote and directed her first play–based on The Phantom Tollbooth–with those students as her inspiration. These students attended her wedding on an early weekend in June, and we were back in class together the very next Monday!

Ms. Jaffe and her 6th grade students wrote a play about the Old Testament called Love and Locusts. The stories of Abraham, Jacob and Moses came to life with some comical twists.

“Powhatan is where my daughter Catherine grew up, learned to become a focused student, and became a stronger athlete, speaker, and performer. It is her second home, and the teachers and coaches here nurtured her for ten vibrant years.” – Louise Jaffe

Jaffe helps a small group of exceptionally talented writers and editors as they produce the literary magazine, Powhatan Voices, together each spring.

Hobbies: Jaffe enjoys running along the Shenandoah River and the ponds of Truro, Cape Cod. She is also a photographer; “I strive to put folks in their best light as I photograph them in natural light.”

Favorite Quotes: My favorite quote comes from a book I read with my students, Wednesday Wars. It is a conversation between a teacher and her student. “People like to think that if they’re prepared, then nothing bad can really happen. Sometimes it feels as if life is governed by the slings and arrows of outrageous fortune.” “Is there anything else we can do?” She smiled. Not a teacher smile. “Two things: First, learn to diagram sentences—and it is rude to roll your eyes, Holling. Learn everything you can—everything. And then use all that you have learned to grow up to be a wise and good man.”